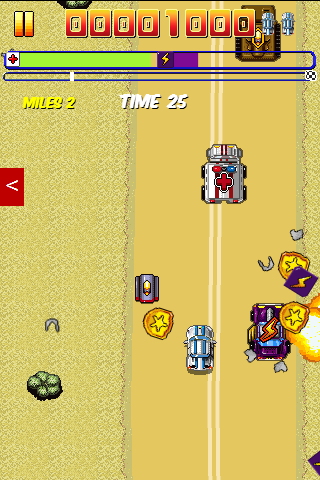 I put a lot of work in to this one in terms of balancing the action versus rewarding the player with plenty of on-screen action.

I’m not really in to doing post-mortems on my games but for this one I’d say it’s come out pretty close to how I envisaged it. I made a decision early on to keep the pace up and allow the player a fair amount of freedom to move and blast things. To that end I litter the screen with explosions, bombs, bullets and debris.
I’m hoping that it’s well received enough to justify the extra effort :)

Ultimately the question of “is it fun?” has to be answered and I’d have to say that the feedback from testing that I’ve had is extremely positive. Most of the comments returned highlight the soundtrack, audio fx and big colourful sprites. I’m thrilled to read such encouraging comments since it pretty much underpins my ethos for making games. It’s certainly something that will carry over in to my book.

You can play the game over at the arcade. Sign up, sign in and shoot for the top spot. Let’s see how good you are!